While mammograms have been the widely accepted (and strongly promoted) method of screening for breast cancer since the 1950′s, the evidence now points strongly towards mammograms not only being unreliable in their role of screening, but in fact being responsible for posing real dangers to women (see article, ‘Mammograms ~ what your doctor won’t tell you!’).

The good news? There’s a safe and non-invasive alternative, and it’s called Digital Infrared Thermal Imaging (DITI) or Thermography. Approved for clinical use in 1982, this quick and easy procedure that is not only pain-free and side-effect free, but most importantly radiation-free, is now widely available! This device makes use of an infra-red imaging camera that is used to detect subtle changes in skin temperatures that can indicate inflammation of the tissues which precedes cancer development. 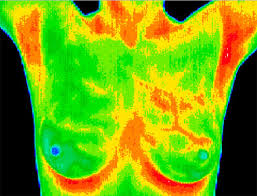 DITI is a highly sensitive screening method that can pick up what would otherwise be imperceptible changes. It works by detecting physiological changes in the tissues (rather than looking for anatomical changes/lumps as in mammography) and as a result, abnormal changes in the breast can be detected far earlier than that of a mammogram.

It is a very safe monitoring device for women of all ages, including young women where mammography is particularly contraindicated. It is often used for full-body imaging (not just the breast tissue) and is highly sensitive to pathology of the muscles, blood vessels, nerves and bone tissues throughout the body potentially revealing other problem areas.

So why then, if DITI is such a safe alternative to mammography has it not been promoted as such by the various cancer groups?  The answer: politics and big money!

In summary; those women who wish to avoid the risks of radiation that regular mammograms pose, can consider thermography instead as an annual screening test, or resort to it at times when concerns are identified.  When this is adopted together with gentle ‘breast awareness’ (see article: breast self examinations – new thoughts) and a healthy diet and lifestyle, breast health can be monitored and maintained in a natural and non-toxic manner.

Dr Janey has a conventional medical background in Veterinary Science (BVSC, MRCVS) which spanned 22 years of experience in the industry, including much with cancer.