There is a long list of reasons why anyone who wants to considerably reduce their risk of getting cancer, particularly breast or prostate cancer, should consider discontinuing the regular eating of meat. Here we explore one of those reasons….

The production of meat is a highly competitive, profit-driven enterprise which requires that cattle reach the maximum possible weight in the shortest possible time, while costing the feedlot the minimum possible dollar per head of cattle. It’s an equation that’s hard to get right without hormones (and antibiotics) coming to the rescue!

While the history of the artificial stimulation of the growth of feedlot cattle through hormone supplementation reads like a long and rather sordid tale, the entire debacle was brought to a head by the eventual banning of the synthetic oestrogen, Diethylstilboestrol (DES) in 1972. After 40 years of convincing evidence that DES routinely added to the food of feedlot cattle was highly carcinogenic (cancer causing), its use was eventually discontinued. Looking back, it is nearly impossible to calculate the full scale of consequences that this drug caused to the health of the meat-eating population.

Incidentally, DES was also used during this time to treat breast and prostate cancer, as well as to reduce the risk of pregnancy complications. In time however, far from ‘protecting against cancer’, the children born of the pregnant mothers advised to take this drug were to become known as ‘DES daughters and sons’ because of the cancer-causing effects of its use!

So we can all breathe a sigh of relief now that the meat industry has learnt from this grave mistake? Well, sadly not! After the banning of DES, one cancer-causing oestrogenic hormone was simply to be replaced by others in our feedlot cattle. Instead of oestrogenic hormones added to the food, now various hormones and growth stimulants (oestrogen, progesterone, testosterone and anabolic steroids) were to be added in the form of a single implanted pellet under the skin of one of the ears of the cow. 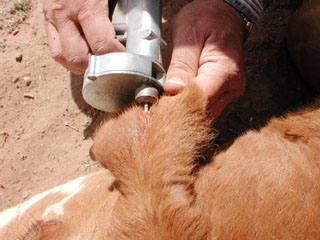 However, things did not stop there. By 1990 the FDA had granted a doubling of the dose, thereby allowing a pellet to be implanted in the skin of both ears. Added to that, when a random survey across numerous states in the US was conducted, it found that approximately 50% of feedlot cattle had additional illegal implants of hormones directly into their muscles, the intention being to further accelerate growth. These intramuscular implants caused much higher absorption of hormones, with resultant significantly higher residues in the meat, forcing the FDA to admit that this could cause ‘adverse effects’.

Samuel Epstein, Professor of Occupational and Environmental Medicine states that “records of hormonal levels in beef, obtained under the Federal Freedom of Information Act from the FDA, show that even when ranchers implant single hormone pellets beneath the skin under ideal laboratory conditions, levels of oestradiol and other hormones in meat and other organs are more than triple the levels found in non-implanted controls. Much higher levels, up to 300 fold, result from the common practice of illegal intramuscular implants”.

A separate report by the FDA on a product called Synovex-S (containing oestradiol and progestin) raised further cause for concern. Cattle that had been implanted with this hormonal product demonstrated oestrogen levels of the muscle that were 12 times above normal. In the liver they were 6x normal; kidneys 9x normal and in fat 23x normal. When the cattle were slaughtered for consumption, these levels were higher and if there were multiple implants or implants in the muscles, they were higher still.

So when the meat-eater tucks into a ‘hearty’ steak, burger or spaghetti bolognaise, they also ingest a pharmacy of hormones, most notably oestrogenic hormones. Because it has been shown conclusively that our life-time exposure to oestrogen is proportional to our risk of breast cancer, the eating of beef is a health hazard that no one, especially those wishing to avoid breast cancer, should take lightly. 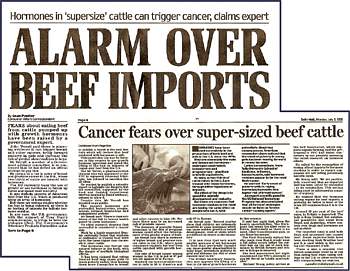 However, breast cancer isn’t the only concern here……these oestrogenic hormones in meat are also linked to cancer of the uterus, prostate and testes, so men need to take note as well!

The natural alternative of course is to embrace a vegetable-based diet. If you don’t feel you are able to give up meat completely, simply reducing your intake substantially (eating meat 1-2x per week) and choosing meat from grass-fed, organically-raised cows is a sensible option to reducing your exposure to the carcinogenic and endocrine disrupting effects of synthetic hormones in your diet.

Dr Janey has a conventional medical background in Veterinary Science (BVSC, MRCVS) which spanned 22 years of experience in the industry, including much with cancer.